Pollock and Haddock are two fish from the same family, the cod family, which includes more than 200 different fish species. Although they may appear the same, they have some key differences that distinguish one another.

While both fish are popular globally, Pollock is one of the most consumed fish in the world.

From fast-food restaurant chains to the fish sticks you make at home, most of the meat comes from Pollock. The best thing about eating Pollock is that you don’t have to worry about it being farmed in unsanitary conditions.

Almost all the Pollock and Haddock comes from a natural environment that brings minimal toxins and contaminants to the table.

Here we will be going over some aspects of Pollock vs. Haddock. Both fish are pretty famous and known for their flavorful meat.

Both look similar and have various other similarities, as they both are bottom fish of the cod family, but there are key differences that help you determine which one is best for you.

This article will give you a rundown of the major differences between Pollock and Haddock so you can pick one to bring to your table.

So, follow through with the article to learn more about Pollock and Haddock.

Pollock fish from the cod fish family is one of the top 25 most nutritious foods worldwide. The fish is widely distributed in the North Pacific Ocean, with higher concentrations in the Bering Sea, USA.

According to US FDA standards, the Alaskan water conditions are hygienic, and the Pollock from there has near to zero contaminants like mercury, making it a very safe option for all, including pregnant ladies and young children.

This fish is famous for one of the highest proportions of omega-three to omega-six, which is why people prefer to eat fish meat.

It is a low-fat, protein-rich (provides 40% of daily protein requirement) fish loaded with vitamin B12, omega-3 fatty acids, and various other minerals and vitamins.

It is free from contaminants like bacteria and other toxic metals like mercury and together with its high-quality nutrition value, it is a heart-healthy fish. 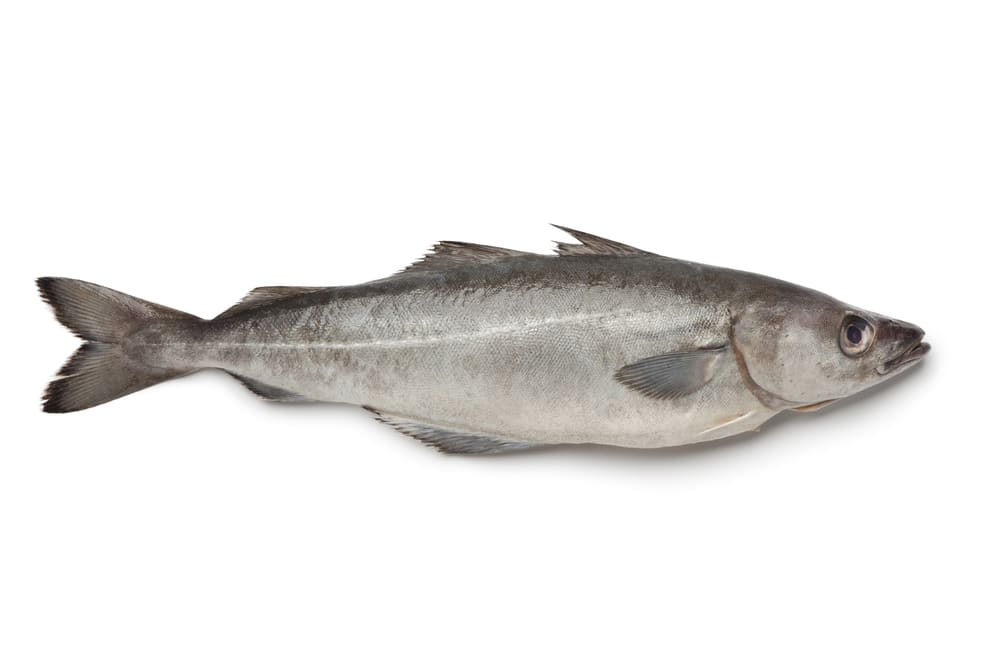 So, if you’re looking for maximum nutritional benefits, there isn’t a better option available.

Since Pollock is fairly common and is liked around the globe, it is cheap, affordable, and is easily usable as a part of your weekly diet.

So, if you have a small budget for adding fish with high nutritional value to your dinner meal, then Pollock is the best type of fish you can choose for your fitness diet.

Looking from the outside, it is relatively easy to set apart Pollock from Haddock just by looking at the fish’s color and texture.

For Pollock, you get the same cylindrical shape, but the structure of Haddock is a bit round, and you can notice the dark print on one side of its body.

With that said, the average size for both fish types is somewhat comparable, with Pollock being a little smaller than the average mature Haddock.

In terms of flavor, you will get more depth while using Pollock in your recipe. Even though Pollock can be substituted for Haddock, it is common to notice many differences between the two fish.

You will notice that Pollock has a more intense flavor with a larger-sized flake and oily texture when compared with Haddock. So, if you’re a picky eater, this information should help you decide better what fish to use in your recipe. 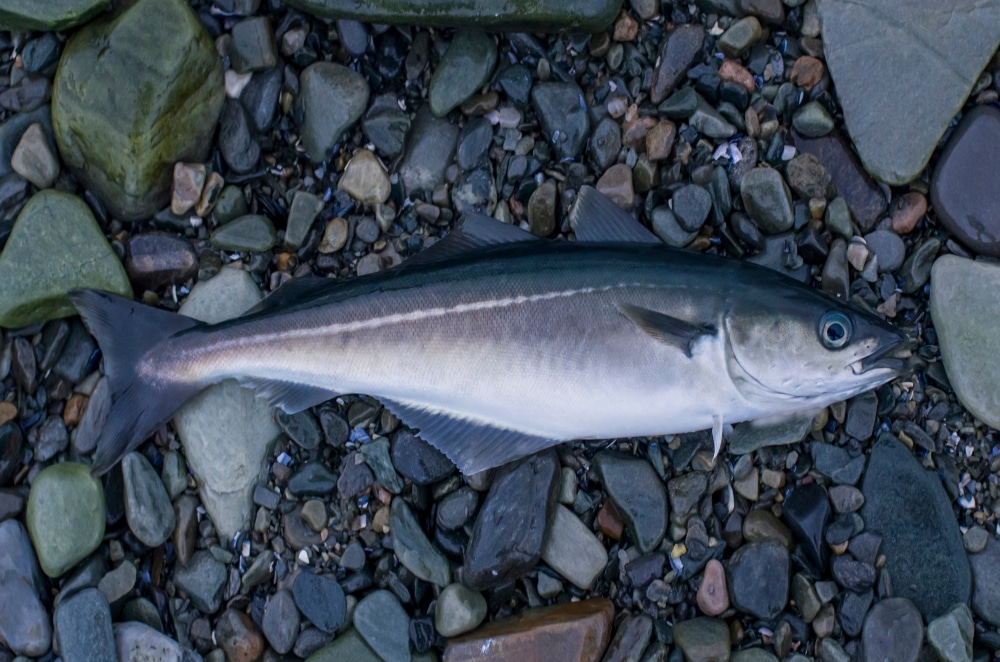 However, if you don’t mind experimenting with new meat, Haddock should give you a relatively similar texture with a smaller-sized flake. So, if you can’t get your hands on Pollock, Haddock is a perfectly good option for your recipe.

It might not bring as strong a flavor to your dish, but you won’t notice much difference if you’re not a picky eater.

Haddock, similar to Pollock, belongs to the cod fish family and is ray-finned saltwater fish. Although it is used interchangeably with other cods, Haddock is comparatively more flavorful and fishy than the other cods.

One can find haddocks on both sides of the North Atlantic, they are found in abundance in Gulf Marine and Georges Bank.

It is pretty easy to identify Haddock from Pollock just by looking at the color.

Haddock brings a unique pattern of two colors divided by a line going across the fish’s body. It has a purple-grey head and back, which transform to silver grey and pinkish white on the belly.

At the same time, you will notice the same greenish color across the body of Pollock.

The nutritional benefits from both fish are pretty similar, with Pollock having more proteins and food energy per the standard serving size. You will also get more calcium from Pollock compared to Haddock’s serving size.

However, the Haddock serves more calories than Pollock and has a higher fat content.

However, that does not mean Haddock doesn’t have nutritional benefits. Haddock offers more Vitamin A and contributes to your balanced diet by providing sufficient sodium. 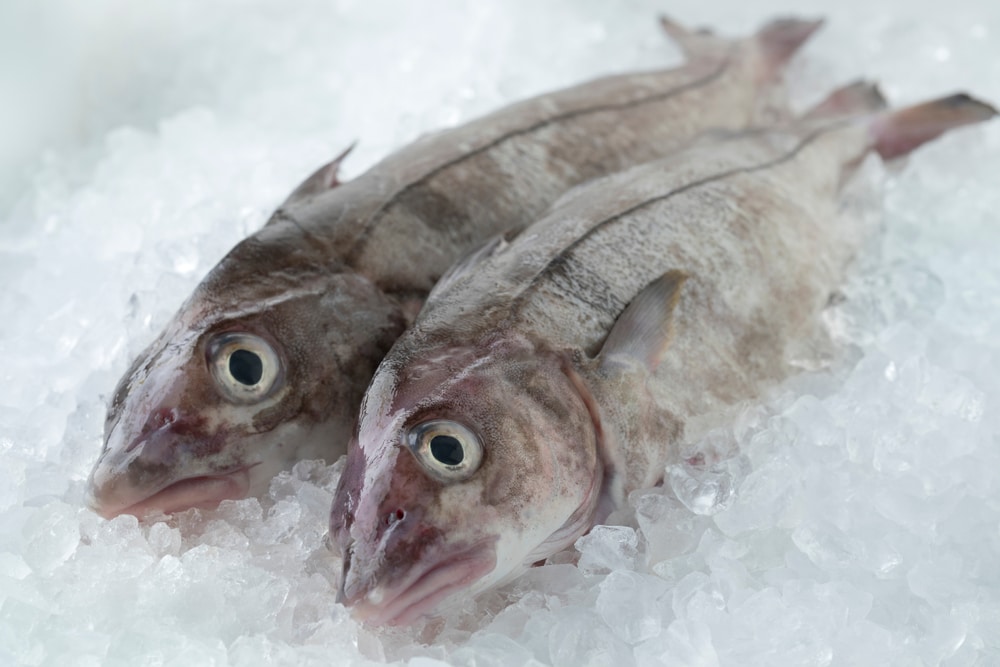 Both of these fish can be substituted for each other in a recipe.

It will be impossible to tell the difference once they are cooked. So, depending on your fitness requirements, you can choose either Haddock or Pollock for your diet plan, and you will benefit substantially from both fish.

Both the Pollock and Haddock are firm white fish, closely related and found in the Atlantic Ocean. One of the features that help a local distinguish between them is their size.

Where an average adult Pollock weighs around 1 to 2 pounds, the Haddock from the same family is slightly larger than Pollock and typically weighs around 2-4 pounds.

So when you are choosing between them, consider the size of the fish, especially when planning a family dinner together; a bigger fish with more meat would be a great option.

The different color combinations of both the fish separate them from each other, even with the significant similarities. Pollock has a combination of purple, pink, grey, and white, whereas the Haddock is brown and green with a light-toned belly. 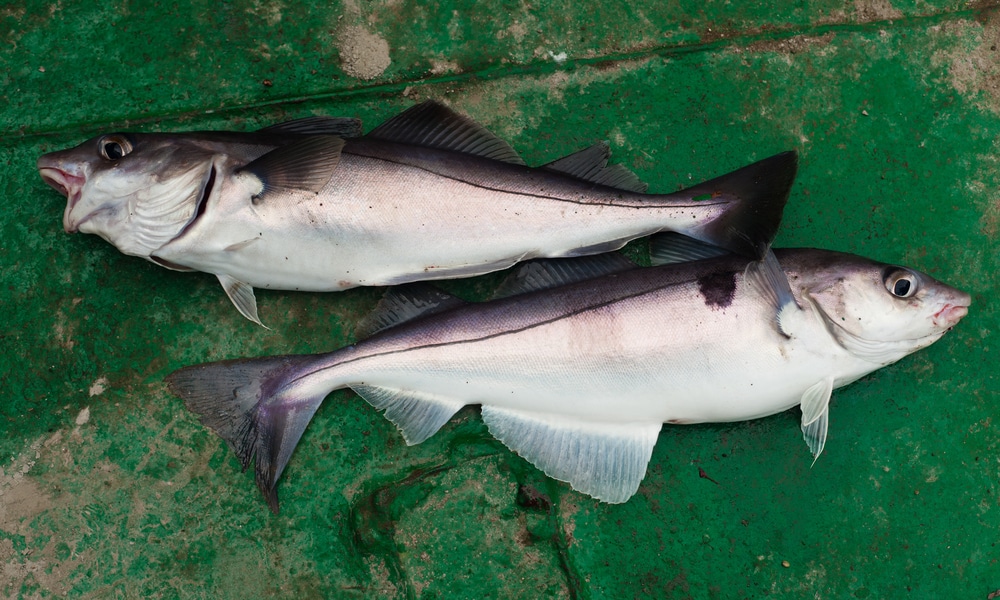 Although the texture of Haddock is firm, it is comparatively less flaky than the Pollock as it has large flakes.

Although both fish have a fairly similar flavor, some people find Pollock has a somewhat oily stronger, and more fishy flavor than Haddock.

This indicates if you are substituting Haddock due to unavailability with Pollock having a robust flavor, use it less to give the neutral flavor to your dish.

How and where you are using the fish in your dish also determines what the best pick is for you. For instance, Pollock has larger flakes and is less firm hence falls apart when cooked, so it’s best suited for fish stew or chowder.

However, the Haddock has small flakes and is comparably firmer when cooked. Hence it is best to serve it as the classic fish and chips or used in fish tacos or other similar dishes.

Pollock’s nutritional value is slightly higher than Haddock’s as it has a higher protein and vitamin B12 content and is low in fat.

It also has 5 times more calcium than Haddock, making it a staple food if you are planning to shift to a rich, healthy, and nutritious diet.

Last but not least is the cost of the fish that attracts the customers. In Pollock vs. Haddock, the Pollock species is much more common and is easy to catch; hence is 50% cheaper compared to Haddock. 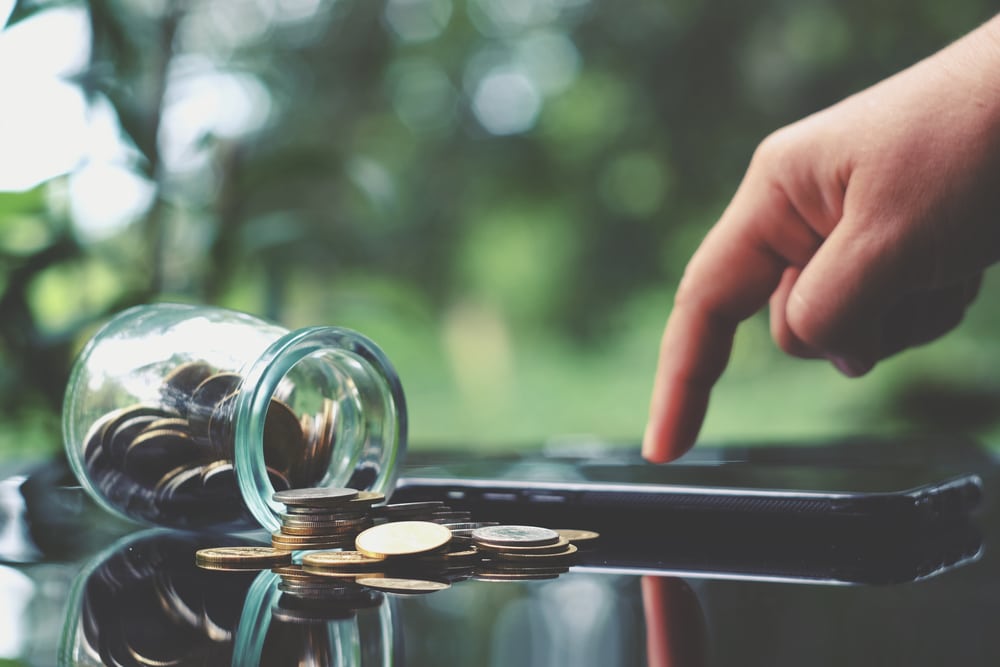 So if you are confused, buy Pollock for its high nutritional value at a low cost.

With that said, the only thing you should focus on is the quality of meat, not the type of meat. As long as you’re buying fresh meat from a reliable buyer, it will offer more benefits to you.

So, even if Pollock has more calcium, a mushy Pollock won’t provide you an advantage over a fresh Haddock. For maximum benefit, you need a reliable supplier that secures your stock from sanitary environments.

Just like Pollock, Haddock isn’t around in fish farms. That means you won’t have to give any mind to dealing with toxins or contaminated water. Most of the time, Haddock from the natural environment is safe to eat.

You can have it as a part of your diet without any issues. However, it still helps to inquire about where your fish came from.