A trout is a fish that is large in size and has colors that can vary depending on the area it lives in and what specie of trout it belongs to.

It has an oval, long body, small eyes, a small head, and a mouth that is stretched back across the body.

Trout fish is usually dark, and has silvery-gray scales on either of its sides. These fish prefer streams, rivers, and cold lakes and are an important source of food for animals and humans.

Some of the carnivores that eat trout fish include bears, eagles, sawbill ducks, and other larger fish such as pike.

These fish have tons of species, but the Apache trout and brown trout are some of the most common ones that you will find.

Both of these are amazing varieties but there are also tons of similarities between them. This is why people often get confused when trying to distinguish between these.

You might run into the same problem which is why going through this article should be beneficial. This is because we will be providing you with all the information required regarding these varieties.

Going through it should help you in understanding how the fish are different from each other.

Apache trout is a species of freshwater fish that belongs to the family of salmon. These are some of the most well-known Pacific trout that most people already know about.

When simply looking at the variety, you will notice that they have a yellow-gold color stretching across the sides of the variety.

This starts to form a dark olive shade as the color gets near the back of these fish.

The color is one of the most distinctive features of the variety, but you should note that this also has spots running across its body. These are usually extended below the lateral line of the fish or around the dorsal fins.

The spots on Apache trout are generally irregular and spread across the variety which is why these can make people confused when trying to distinguish these fish from others.

These are easily some of the easiest ways to distinguish the variety from all of the other species.

Now that you understand this, the second thing to note about these fish is their characteristics. The variety can grow up to 20 inches long which is generally medium-sized.

Though, people should note that there are also some Apache trout that only grow up to 9 inches long.

This is because these most likely survive in smaller streams where they don’t have access to many nutrients and stable food sources. These factors can greatly impact the variety in these cases.

If you are looking for these fish, then you should note that the variety can be found in Eastern parts of Arizona.

Even though these areas have a variety roaming around, trying to find it can be quite difficult. These fish were previously caught by tons of anglers because of how delicious their meat was.

However, at the time, Apache trout have been registered as being extremely endangered which is why fishing them is not an option.

Arizona has even set fines and penalty charges for people trying to catch these varieties.

But if you are simply trying to take a look at these fish then visiting a fish farm should be the best option.

People can usually look for these areas online and contact them beforehand before visiting so that there are no issues later on.

Brown trout are another type of freshwater fish that are from the salmonid family.

These varieties are often compared with Apache trout because of how similar both of them look. Even the size of these fish is generally similar which is why some users often get confused between them.

Talking about this, you should note that there are easily some clear differences between these two varieties when observing them. 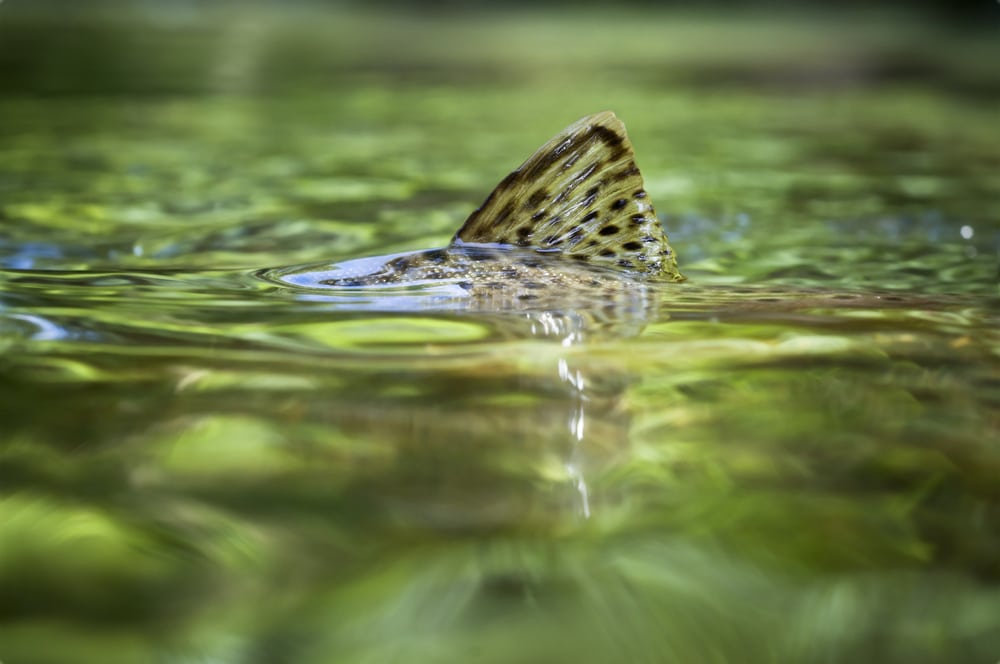 This is why you should understand how these fish can be distinguished between. The process should help you in avoiding tons of problems later on.

The first thing that you should note is that brown trout are native to Europe. However, they have quickly spread to other regions including the US because of their characteristics.

These fish range from about 14 to 24 inches in size which usually depends on the feed these varieties are getting.

The weight can also vary from 2 to even 10 pounds which is why looking for other characteristics is always better.

The color of these fish is brownish-golden which is quite different when compared with Apache trout. Brown trout also have small red spots on their sides that make them unique.

The main reason why this variety is so popular is that it is often used as gamefish by anglers.

Additionally, the meat is not only delicious to eat but it also comes with tons of nutrients. The fillets are packed with protein and omega-3 fatty acids that make the meat a great addition to most diets.

When placing both of these varieties side-by-side, most people should easily be able to tell them apart.

The information provided above should further help you out in case you were getting confused. When it comes to catching these varieties, you should note that Apache trout is not usually available.

This is why your best option is to look for areas that only have brown trout roaming around .

This is the best way to ensure that you don’t accidentally catch the endangered species. Additionally, this should also help you in avoiding other varieties of trout including rainbow trout.